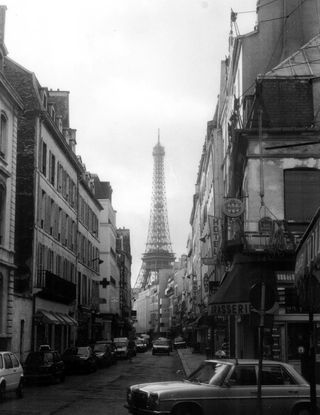 I received an e.mail from an old friend, an American expat living in Australia, and a former card carrying and now Hon. Life Member of the "I hate Karl Marx Society".

In his correspondence he asked me why I had a photo of “Old Carbuncles” [Karl Marx] on the Front Page of my Website. Good Question. Answer: because I took it and rather liked it. I won’t go into his further and witty comments about old Carbuncles, nor is it my intention to bore readers by entering into detailed dialectical counter-argument here, but his comment served to remind me that perhaps the page could do with ‘freshening’ up.  Those that miss ‘Old Carbuncles’ will find him on my next page: About this Site.

However, continuing in the theme of being peripatetic, I attach a photo of an international architectural icon which I took decades ago whilst staying in a studio flat just around the corner of the street. The object of my research whilst there was Vichy France and the tragedy that was la Guerre d’Indochine (1945-54].

On the subject of Paris I will however take the opportunity to remind readers, and my good friend, that the 1848 révolution de Févrie; Victor Hugo’s 1862 masterpiece, Les Misérables, and the revolutionary socialist 1871 Paris Commune served as inspiration for Karl Marx.  Indeed, he devoted much time to analysing and writing about the latter which he described as an example of the “dictatorship of the proletariat”.

My friend finds it difficult to understand my not so crypto-Marxism. He also knows me as a staunch anti-Communist and proponent of freedom. He knows I loathe dictatorships either by the proletariat or by anyone else. Moreover, he also knows I also hold deep spiritual views – so how therefore can I countenance the atheism of Marxism. This raises the interesting question – can one hold two irreconcilable views and remain committed to both?

Quite probably not, that’s why I’m confined to my own private asylum which allows me to vent my unsolicited passions on you, my poor friends and readers. And the operative word here is ‘passion’.

Having faced the Marxist enemy over battle sights so to speak, I sought throughout my academic life to get into his brain. In doing so, my concerns and opposition to communism - both academic and political – were reinforced. Notwithstanding, I came to appreciate many of the subtleties that Marx had to offer rather than just his simplistic account of the millenarian march of history and the hijacking of his ideas by evil, power drunk, politically pathogenic lunatics.

So, I contend that whatever his faults in economics and however simplistic his history, his narrative about la condition humain remains a significant contribution towards our understanding of society. And what cannot be denied is his passion. His passion for humanity, for a better way of understanding economics and his passion to conduce to societal equity remained with him until his old age.  These passions reflect in many respects my own world view.

I remain angry about the same things I did whilst a young man. I loathe capitalism rampant - evidence the exploitation of third world workers to feed our hedonist materialism. I loathe the stock market – as I have said elsewhere – if the stock market is the apogee of our Western civilization then we really haven’t come too far. I abhor political hypocrisy and the sham that plays out daily in our parliaments in the name of liberal democracy. I am disgusted at the materialism of our society; appalled at our smugness in moving our filthy industries off shore; I am saddened at the decline of the church; I despair at the lack of spiritual values in our society and, last but certainly not least, I worry about our armaments industry and our propensity to keep finding wars to fight.

None of these contradict my spiritual faith, far from it.

Conversely, I loathe quasi-Marxist leftist revisionism and post-modernist relativism. The decline of university standards; the morbid idiocy that passes as tertiary level social studies programmes; the obvious political bias inherent in so many quarters of our education industry; the arrant rubbish that serves as Australian history; graduate journalists who have no idea what a “Patron” is and who think the Viet Nam war was fought in 1900. Primary school teachers who don’t know who their current premier is – do I need to go on?  This dumbing down of our education system ergo our society is a direct consequence of the deliberate application of quasi-Marxist policies. I deplore the replacement of a justice system with a legal system and I remain particularly critical of political correctness and the muzzling of the free press. All of which can be directly slated to social engineers trained in the closed-mind school of progressive social sciences.

Well we don’t have to put up with it. The internet has given us a tool to express our views in any number of ways. I have said elsewhere in this website: “You and I can make a difference. We can read the papers. We can say no! Enough already! We can write to politicians. We can vote responsibly rather than ideologically or the way we’ve always voted.  We can sign on-line petitions. We can keep in touch. We can go to church, the temple, the mosque or the synagogue. We can lend a helping hand. You name it, we can do it. No matter how old or frail we are.”

Suffice it be said that I shall continue, in Dylan Thomas’ immortal words, to “rage against the dying of the light” – and to me that light is the ethical health of our society. I urge you all to rage at what you see as injustice, ignorance; corruption and sheer evil-doings. We certainly won’t all agree, but at least we’ve been true to ourselves. 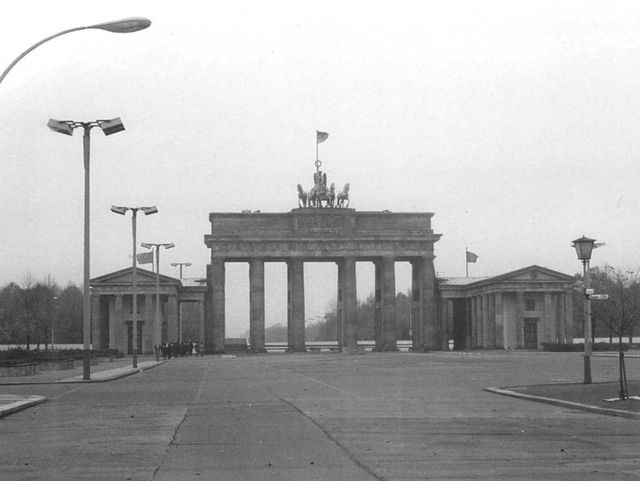 The Brandenburg Gate. November 1983. Photo by the Author.

Early one cold and overcast November day in 1983 I crossed through Check Point Charlie for a day in East Berlin.

After the obligatory look at the Brandenburg Gate, my next priority was Karl Marx’s old alma mata, the Humboldt University of Berlin, just down the road on the Unter den Linden. I was most keen to wander around the corridors of the spiritual home of Hegel and the intellectual birthplace of Marxism. Given the communist state had restored the building after the predations of the war I was quite sure that the University would have made a feature of such history.

It must have been time for lectures as I arrived - students were milling around outside and climbing the steps to go inside. An opportunity to sit in on a lecture I thought - fond memories of my undergraduate days – so I joined the throng of remarkably clean cut and quiet students, climbed up the steps and entered the foyer.

As I did so from the shadows appeared at my sides two sets of muscle in identical suits: no you cannot enter – said one in English – did I look English with my beard, longish hair, duffel jacket, camera and note book?  I want to see where Karl Marx studied – It is verboten - You are not a student - Go now please. Please? I had no option as they physically escorted me down the steps. So much for intellectual solidarity with the leader. I settled for a cup of coffee and cake in a grubby café over the road.

As I thought about the incident over my cup of German workers coffee I was struck by the irony of exclusion and paranoia in the Workers State. I could almost hear old Karl groaning all the way from Highgate.

It was not until very recently that I learnt that Humboldt University, during the heady days of the East German Workers Paradise, catered for those ideologically pure students destined for higher things in the State. The authorities took their charges most seriously and instituted steps to ensure that the State’s future intellectuals were not infected with any liberal western ideas, such as curiosity for curiosities sake. There would have been no room for young Hegelians at Humboldt then.