The Case of the Oversize Shopping Trolley 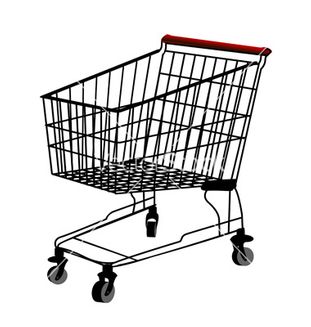 “One hundred and thirty eight dollars!” my wife declaimed, bursting into my Scriptorium brandishing a handful of plastic bags. She had returned from shopping – yes roles in the household are traditional, I do the dogs, the cars and the garden.

“And it all looked like nothing in the trolley”, she added in disgust as I carried them upstairs.

The result of this trivial encounter in domestic economics - What did she buy? Six tenths of bugger-all!

This brings me to the fascinating point of the oversize trolley. Our modest shopping always looks ‘like nothing’ dwarfed in the chromed quarry trailers we push around the aisles. That’s the idea – it’s meant to look like nothing. And nothing means you have to fill it up – more packets of cereal ‘cos you get two for the price of … two; some more frozen meat because lamb’s on special; perhaps some of that nice juice on special and why not a couple of long life milk ‘just in case’; we’d better get some extra paper towel ... whoa … don’t forget a couple of packets of dog treats – they do so love’m. There, the trolley doesn’t look nearly so bad now at the check-out does it?

So it goes – the cost of living keeps spiralling - money in money out, week in week out. We all agree that the cost of living is excessive – we know it keeps rising and, bang for buck, we’re know getting less for our grocery shopping.  But our economists, statisticians and politicians tell us otherwise. We’re all doing very well we are assured.

Despite macro economic reforms, free trade agreements, level playing fields, carbon taxes on, carbon taxes off, income tax reform and the plethora of abject nonsense so beloved of politicians, the supposed-trickle down benefits just aren’t trickling down. Rather, the cost of living keeps going up. Ask any housewife or household provider.

Why is this so? Because the whole economic system is one big con-job and, if the truth be told, there is no answer because no one knows how to frame the question.

I hold that, stripped of its abstractions, economics is merely the description of the everyday business transactions of life – be they small or be they large. A family’s housekeeping is as equally part of the economic milieu as the national distribution of food or the international capital trading of a merchant bank. Indeed, the family housekeeping should be the prime benchmark of the success of any economic theory. If sufficient numbers of households are unable to balance their budgets due to failures in other spheres of economic activity the efficacy of that particular economic theory must come under question.

As an undergraduate I was a keen student of what was dubbed ‘Koesian Economics’. The wondrous things one could do with $50, three bank accounts, two cheque books and a shoebox full of parking tickets! It was during this frenetic, formative and creative period that I came to realise that the study of economics was a load of old bollocks.

There is one factor rarely mentioned in any economic theory, namely Wilful Greed. This is the factor of excess profit that has nothing to do with the give and take of supply and demand, but rather everything to do with just how much can some slippery shite can gouge out of a transaction.

However, to return again to the allegorical shopping trolley. We are daily exhorted to spend more because by buying more we boost economic activity. Let’s hear it for consumer confidence. Spend! Spend! Spend! Ka Ching! Those Scrooge’s squirrelling away their money just aren’t pulling their weight. So we spend.

So, by spending more we tend to get into debt. Now debt is bad, or so we are told – our society already owes too much on credit card debt – we must curtail this. So, what can we do about interest rates?

Home loans, car loans, student loans, holiday loans – variable interest rates, fixed interest rates, fixed term deposits, negative gearing - keep spending. Not enough money to spend – try suing: “No Win No Fee!” There are any numbers of legal conmen out there ready to prostitute themselves for a spurious cause.  Insurance scams – no worries. Been through a flood or cyclone recently? We’re so very sorry – need some counselling. Tell sufficient porkies and the assessor will get his mate the tradie to verify your claim, for a consideration of course - new shed, flooring, car, and fridge - whatever! No worries. Insurance pays. Premiums go up – plastic comes out – interest rates go up – no worries.

Yes, we’re spendthrifts though and through and, better still, it’s all for a good cause – the economy.

But, during the course of our magnificent squander through life, do any of us give a continental toss about those who really are doing the hard yards?

How do some people manage? How does a lower income family juggle its budget to eat properly; send the kids to school appropriately dressed and equipped; purchase and maintain a car; meet the mortgage on a house; pay medical bills and power bills and so forth and so on? If an average earning family struggles how in the name of Dickens’s Ghost does a family of limited means exist?

This is a question that has vexed me since I started to think about social questions and I am no closer now to an answer than I was half a century ago.

I do know from looking at their trolleys that they seem to subsist on the most amazing juxtaposition of inferior and unwholesome rubbish coupled with cartons of soft drink, ice cream and snack food. Is this choice or is it economics?

Whatever it is, it’s a telling indictment on the social and financial foundation of our society.

I am reminded of an odd phenomenon of the Great Depression years. Despite the scarcity of cash, people always found enough to go to the films, to buy a chocolate, a cigarette or a drink. In the depths of despair and destitution everyone is entitled to a treat. Which one of us has the right to deny anyone that?

So, as we wend our way through the shopping aisles of life, we could do worse than ensuring that our choices are governed by the primacy of our needs rather than our wants. Moreover, if our trolleys were smaller the more modest would become our expectations and our economy might, just might, become more manageable.