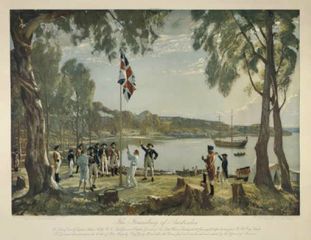 On 28 April 1770 Captain Cook, representing the rapacious British Crown, assembled his vast flotilla of warships off Botany Bay on the east coast of the Indigenous Confederacy of Australia. His officers drilled the sailors manning the assault craft; likewise his Royal Marine officers briefed the ten thousand well drilled and heavily armed marines who were to lead the continental assault the following morning.

Knowing full well the wily nature of their determined, sophisticated and cohesive enemy, Cook’s force knew that it might be a close run thing. The vast and closely co-ordinated Australian National Indigenous Army [ANIA] had proved in the past to be no mean enemy. It had already repelled invasions by the Vikings as well as in recent years the various Bulgarian, Tibetan and Tonkin military expeditions. The Grand Armée of Napoleon had flatly refused to be drawn into conflict with ANIA and the imperial Dutch forces were seeking to negotiate a concordat with the Supreme Continental Ruler – when they found him, it or her.

But the British imperial crown was made of sterner stuff. It was intent on an invasion of shock and awe and a subsequent policy of total annihilation of not only ANIA but the entire continental population, thereby ensuring the total destruction of the long and proud tradition of Australian national sovereignty.

The invasion campaign, stripped of its complexities, involved a sustained pre-dawn naval bombardment of the shore on 29 April. Under the cover of the bombardment the assault craft would be launched. Having established a beachhead two regiments of Marines were to strike south west in fast moving columns to encircle, capture and destroy the national capital of Canbuggerme. The remaining forces would consolidate the immediate coastline and commence the construction of Fort Sydney.

As the dark heavens lighted slightly and the pickaninny  dawn came down – the tension across the fleet was palpable - thousands of men cramped and sweating in their assault barges, the creaking of leather accoutrements and chink of swords and musketry echoed over the ocean – waiting, waiting for the bombardment to commence,

Yes, it had been a taut few hours of preparation, but now the Crown’s Australasian Expeditionary Force [AEF] was ready to unleash the fully fury of Britain’s military power, heartened by Cook’s stirring exhortation to ‘wag the flag and flog the wog!’

Considering everyone else is re-writing history, why not me?  In any event the foregoing is a far more exciting narrative of Cook’s peaceable scientific voyage and possession of the eastern part New Holland than the prosaic reality.

So what about all this nonsense about colonial Britain’s invasion of Australia? Obviously the liberal progressives must be getting restless again.

If it were an April Fool’s Day academic prank the subject would be laughable. But that such powerful and penetrating minds as Queensland’s Premier Annastacia Palaszczuk should take it all seriously gives cause to worry. Likewise, that other such feeble-wits from the soiled halls of Australian academe actually believe this tripe speaks volumes about the quality of our educational standards.

What was once known as Captain Cook’s discovery of Australia on 29 April 1770 and his subsequent claiming of same for the British crown is now being recast as his ‘invasion’.

Well, in today’s world of the increasing curtailment of the principles of freedom of speech by political correctness, the liberal progressive thought police are quick to point out that words are not neutral and that words serve to reinforce stereotypes and assumptions which serve the interests of the ‘ruling class’.  Chief among these assumptions is the idea that Cook arrived peaceably at our island continent and took possession, an act that subsequently led to British settlement, the dislocation and displacement of the aborigines and various incidents of tragic and murderous interface which did not go well for the blacks. This we know.

This knowledge, widely taught at schools and university is however not good enough for many of the woolly-minded burghers of academe and their equally woolly and scruffy [and smelly] legions of followers and activists who subscribe to the modern version of the Noble Savage narrative. They would have us believe that Cook’s landing was an ‘invasion’ with all the connotations implied therein.

The bare facts of the matter are that on 29 April 170 the British Crown took possession of the eastern part of Terra Australis Incognita.[1] Period.

So let us then have a look at the etymology and definition of ‘invasion’.

Derived from Middle English, this in turn derived from the Latin verb: invãdere – its definition is broad and varied. From a cursory review of the Oxford, Macquarie and Chambers dictionaries it may be summarised as:  to enter with force with hostile intent; or to settle, occupy, annexation, appropriate to plunder, settle by force, and take over, capture, takeover and so forth.

That language is not neutral is not under dispute. The word ‘invasion’ qua ‘invasion’ is in itself, a heavily value laden term implying a less than moral correctness of action. ‘He, she or it invade my house - quite distinctly implies something unwanted and unsanctioned by me.

Thus, to term Cook’s arrival and possession of Terra Incognita as an invasion is a direct implication of moral infamy. This is nonsense.

Now one might say – this was a Eurocentric view of the world, what about the aborigines living on the land at the time?

The answer is two-fold. The first is an obvious one – That’s history. The fact that Europe was the dominant culture of the age is a matter of record. This happened – just as William the Conqueror and his Normans occupied England through ‘invasion’ happened. That the Saxons didn’t like it is a matter of record. It happened – Period. No amount of wailing or historical revision will change that fact.

The second point is more interesting – so let us examine the question of the aborigines living on the land at the time.

The assumption behind the notion Terra Incognita, first coined by the Greek philosopher Ptolemy, was that not only was it uncharted it was populated by wild beasts, monsters and savages. This assumption was later proved partly correct. Although In 1770 science had well dispensed with monsters but the country was indeed inhabited by strange flora and fauna and disparate and primitive tribesmen with no notion of a nation state. It might also be said that these were, in their tribal groups, in a constant state of conflict with each other. The truth is that there was no widespread and coordinated national resistance because there was no nation but only small and dispersed tribes speaking some 250 languages. Indeed, it is estimated that at the time of Cook’s arrival some 315,000 and 750,000 people lived on the continent.

In this context Cook’s ship, the Endeavour carrying 94 people including the ship's company of 73 sailors and 12 Royal Marines hardly constituted a credible invasion force! Moreover, it should be remembered that of the main landing force a group of ‘invaders’ under the direction of the botanist Joseph Banks spent the week ashore picking flowers!

Cook annexed not a nation but a land mass upon which dwelt a diverse number of tribes. No matter how the liberal progressives wish it otherwise, it is for them a bothersome truth.

These tribes were primitive in the extreme. Many were still in the stone-age, eking out a hunter and gatherer existence. The Australian aborigines, although having learnt how to live on the land – after some many thousands of years one would reasonably expect them to have done so - they had not even invented the wheel. The fact that some of them were cannibals – [see North Queensland] – is yet another bothersome and unpleasant truth for the woolly minded supporters of the Noble Savage.

After the first fleet and settlement eighteen years later there were indeed bitter but independent clashes and bloodshed between the European colonisers and the aborigines – a tragic and natural corollary of a first world superpower meeting a stone age culture.  But this is a far cry from a systematic invasion by James Cook.

Captain Cook’s primary reason for taking possession was to forestall French and Dutch territorial ambitions. This was later followed by settlement. Again, this is somewhat different from invasion.

There can of course be no denying that aborigines were displaced, their traditional hunting grounds annexed by foreign colonists and that, although strictly prohibited by the British colonial authorities, there was the spilling of blood in the whole tragic process.

But this notion of displacement is part and parcel of Australian history. That the aboriginal descendants retain a sense of bitterness over the past is as sad as it is worthless and retrogressive. This constant introspection about past wrongs is of no help in addressing the present or future. But that is another point. Suffice it be said that some aborigines may well feel that British settlement was an invasion. They may feel that non-aboriginal Australians should feel guilty about the failures of the past. It is their right to feel as they may. These feelings do not however reflect the whole truth. It is a complicated story – wishing it into simplicity does not make it so. Indeed, it further complicates the impetus to move forward.

There is another aspect to the story of settlement often and conveniently overlooked by the progressive liberals.

Although no one can be sure definitively it is generally accepted that the early continental land bridge between Australia and New Guinea provided the access to Australia by nomadic tribes moving south. Furthermore, as different tribes moved south they naturally pushed their predecessors further south or displaced them either by force, integration or by peaceable persuasion.

Thus annexation, settlement, appropriation and occupation are natural themes in the human history of the Australian island continent. In this light, Captain Cook’s visit may be seen as just another act of colonial settlement, this time by a sophisticated eighteenth century nation state. Australian demography has radically altered in the past sixty years by other forms of orderly settlement, now termed ‘immigration’.

So what to make of the University of New South Wales and its latest exercise in kite flying by its thought police? Good natured humour was my first instinct. ‘Bollocks’ was my first thought when I heard the news of the ‘invasion’.

“I am offended. They’re rewriting my history. How much compensation can I claim under Section 18C of the Racial Discrimination Act?” Then I realised that being a migrant myself would render me ineligible!

Sadness is perhaps my overarching view. Sadness that one of our second-tier universities should be scrabbling for fag ends trying to be relevant. It speaks volumes about the dumbing down of our academic institutions – and it is of great concern inasmuch that this particular institution has the contract to educate our cadet military officers. That those young and impressionable minds should be subject to such blatant and blinkered progressive ‘new-speak’ should be of great concern to everyone.

Perhaps they might in the future approve of my opening scenario.