The Narrative, the Burning & the Profile 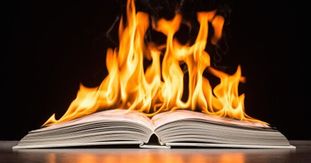 Beginning on May 10, 1933, Nazi-dominated student groups carried out public burnings of books they claimed were “un-German.” The book burnings took place in 34 university towns and cities. Works of prominent Jewish, liberal, and leftist writers ended up in the bonfires. The book burnings stood as a powerful symbol of Nazi intolerance and censorship.

One would have to be a first-class nit to deny that intellectual intolerance and intellectual absurdity are but two of the defining pillars of contemporary society. For a trip into nonsensicality I take two recent examples to illustrate the parlous state of our belles-lettres. The first is an article in today’s Australian newspaper [13 April] and another is a news story of last month [March 2021].

The Australian today carried an exclusive story headlined: “Elite journal under fire over ‘racism’” and penned by Stephen Rice.[1] It concerns the publication of a peer-reviewed study published in the Australian and New Zealand Journal of Criminology. This study, published last September, points to high levels of violent crime by Sudanese-born youths in Victoria. The publication of this study has however engendered a bitter row amongst the Australian fraternity of criminologists and lawyers, some of whom claim the study to be racist.

The authors of the study are Dr Stephane Shepherd and Benjamin Spivak. Dr Shepherd is a Swinburne University Researcher; a Fulbright scholar, an adjunct professor at Johns Hopkins University, a member of the Eastern Regional Advisory Committee of the Victorian Multicultural Commission and author of dozens of academic papers on race and crime. He is also an African-Australian.

Dr Benjamin Spivak holds a Bachelor of Arts (Honours) and a Ph.D. from Monash University. In his own words: I am a lecturer at the Centre for Forensic Behavioural Science, Swinburne University of Technology. My research interests relate to measurement, causal inference and prediction applied to understanding problems in criminal justice. My research focuses on three areas - legal decision-making, risk assessment and cross-cultural differences in offending and victimization.[2]

Stripped to its essence, the authors’ article posits that higher rates of African-Australian youth imprisonment were most likely because of an increase in violent activity by some members of that group rather than because of police profiling.

Their study found there was a significantly higher rate of “crimes against the person” — such as robbery and assault — by South Sudanese-born youth compared with Australia-born youth. The authors explicitly noted however that “the overwhelming majority of Sudanese-Victorians are law-abiding” and their findings “should prompt concerted efforts to better address specific community needs”.

These conclusions and the study itself have, however, been condemned as being: “racist in terms of its methodological approach” by some academics and activists.

In an emotive and highly unprofessional rant, Melbourne Law School senior fellow (Indigenous programs) Amanda Porter demanded the editors and editorial board of the ANZJC “do something about the racist trollop (sic) that appears on the regular in your not-so academic journal”.[3]

Quite obviously the Shepherd/Spivak study failed the litmus test narrative of progressive public policy. The ‘debate’ will presumably continue in the similar, undignified, un-academic and vitriolic bullying style that we have come to expect from contemporary academia. I hold no expectation for a reasoned outcome.

Moving onto a slightly different perspective of political and cultural narratives is a story that did the rounds of the international media last month. It caught my attention at the time and has given me much food for thought.

To recapitulate, the story in essence is this. Those that watched President Biden’s Inauguration Ceremony might remember a young black school girl reciting a poem. The title of this poem was The Hill We Climb and it was composed by the reader herself, Amanda Gorman. The merits or otherwise of this poem are not the subject of this comment – its international publication is. The details of this farce were kindly provided to me by that ever reliable iconoclastic news agency, Russia Today.

For whatever reason the US publisher, Viking Books, took it into their corporate heads to publish this poem internationally. To produce a Catalan edition they contacted the Barcelona-based publisher Univers, to commission an appropriate translator. Univers commissioned Víctor Obiols, a renowned English-Catalan translator, because they considered him to be the best qualified. Obiols is well-known for translating the works of Shakespeare and Oscar Wilde into Catalan.

However, after Obiols completed the translation, Viking Books contacted Univers and asked them to find a translator: “who is a woman and an activist, preferably of African American origin, instead”.[4]

Speaking to the Agence France Presse news agency, a clearly nonplussed Obiols confirmed: “They did not question my abilities, but they were looking for a different profile, which had to be a woman, young, activist and preferably Black.”

He continued by observing that he was flabbergasted by the US publisher’s stance.

“If I cannot translate a poet because she is a woman, young, Black, an American of the 21st century, neither can I translate Homer because I am not a Greek of the eighth century BC. Or could not have translated Shakespeare because I am not a 16th-century Englishman,” he told the media.

Evidently Obiols is not the first European to be thus discriminated against on equally specious grounds. In Europe that particular ‘debate’ continues.

The immediate issues of concern emanating from these examples of imbecilic nonsense are straightforward. Has contemporary academia totally lost the ability to accept a narrative that deviates from popular fashion? What constitutes the appropriate authority for anyone to write about anything pertaining to another culture?

Given their pedigrees, I am quite certain that Drs Shepherd and Spivak deserve more than the irrational ranting dismissal issued to them by Dr Porter. Moreover, using the yardstick stipulated by Viking, the history of many past and present cultures might never have been documented.  What authority, for example, did the early Europeans colonists exercise in writing about their colonised subjects?  As ridiculous as this would appear, it is a real question if one extrapolates logically along Viking’s path.

Sadly, all too few appreciate the seriousness of this growing imbecility in the halls of our academy. Most would read the story, tut tut, shake their heads in disbelief and file it away along with the statue toppling stories of last year. Popularly known as ‘Cancel Culture’, this anti-intellectual impetus is, in reality, a pernicious nihilism which represents a serious threat to the fundament of our civilisation.

Thoroughly embedded in our tertiary education system and highly prevalent in our general education system, this post-modernist culture is call to the upcoming leaders of tomorrow to deny the legitimacy of our society. Piece by piece, edifice by edifice, icon by icon, tradition by tradition, line by line our history and our heritage is being dismantled – before our very eyes. And still we sit - inert, memorised and naked in fright to speak out.

How many times do we need to be reminded of the magnificent post-war words of the German Lutheran pastor Martin Niemöller. He was describing the cowardice of German intellectuals and clergy - including his own, despite spending seven years in concentration camps as a dissenter – in facilitating the Nazi rise to power and the subsequent horrors thereafter:

First they came for the socialists, and I did not speak out—because I was not a socialist.

Then they came for the Jews, and I did not speak out—because I was not a Jew.

Then they came for me—and there was no one left to speak for me. Pastor Martin Niemöller.

These oft quoted, underappreciated and rarely acted upon lines should serve as a constant call to action to all those who value that which is good about our civilisation – freedom of expression, freedom of association, freedom of worship and so forth.

These freedoms, that we once took for granted, are under increasing pressure as our supposed ‘liberal progressive’ governments tighten the noose around our necks. On whose authority has this happened? Ours: because we chose not to speak out. We remained silent when we should have defended our birthright.

Book burnings were a favourite pastime of the enemies of the open society. Books contain heresies to the authoritarian narrative. Today this metaphorical enthusiasm is manifest in censuring social media – and books. The great political philosopher Sir Karl Popper spent the best part of his lifetime deconstructing the political enemies of the open society. Books, open education and the encouraging of questioning minds were of paramount importance to him.

I have always detested the millenarian left because of their certainty in their cause and their willingness to use coercion to enforce their millenarian ideal. When I started university in 1972 as a young returned soldier I was horrified at the totally closed minds of the Viet Nam Moratorium Peaceniks. I use the term ‘totally’ with deliberation. At that young age they had swallowed in toto a complete world-view that brooked no questions, no dissent, not even a tiniest element of doubt. Such I thought were the enthusiasms of youth.

I confronted my first formal academic variation of this closed-mind-set in my first philosophy tutorial wherein I was insulted by the staff tutor for my military service. Modesty and a touch of embarrassment forebears further details. Suffice it be said that I gained requisite satisfaction.

But this experience had a profound effect on my intellectual development. I learnt, within a few days of my first term, that academia was not all about nuanced study, considered discussion and the proverbial cut and thrust of robust and civilised debate. I realised that I was, to put it bluntly, within the enemy’s walls. I came to determine the distinct difference between having ones ideas challenged and ones weltanschauun tested as opposed to being indoctrinated and threatened. Since those far-away days and several years of formal study later, nothing has disavowed me of my dim view of progressive academia: Scratch a progressive deep enough and you will reveal a totalitarian at heart. Therein is not an individual but a corporate mind and therein a collective responsibility. It’s called passing the buck. Why? The corporate progressive mind holds that the Party, the Cause, the Movement is always right, whatever its machinations, its twists and turns and despite the vileness to which it steeps.

None of this of course is new – critics of dystopic and/or authoritarian politics have been saying this, more elegantly, since the Greeks. However it cannot be said enough. A society that has lost its public discussion, its art and its literature to the ‘Party’ has truly lost its soul. Our dreadful descent into the Abyss can and must be stopped.

….and there was no one left to speak for me.