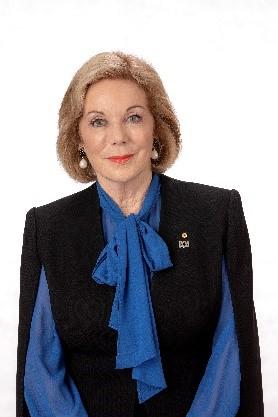 Just when we thought we could forget about the appalling Morrison a bleak joke recently appeared to remind us of his truly atrocious tenure as Prime Minister – Ita Buttrose.

We all remember dear Ita – butter wouldn’t melt in her mouth – Buttrose. Her picture that launched a thousand quips.  Australian of the Year, founding editor of Cleo, long-time editor of the Australian Woman’s Weekly, the perennial face of the modern woman who worked her way to the top in a man’s world – right, you’ve got the picture.

What you’ve doubtless forgotten was that, in 2019, she was Morrison’s ‘Captain’s Pick’ to head that fusty and atavistic consumer of public monies, the Australian Broadcasting Corporation. Appointing a 77 year old Australian fashion icon and journo and the seemingly embodiment of all that was decent and wholesome, to control a crusty collective of Marxist recidivists and a crèche for political wannabees unable to find real work elsewhere - whatever was the man drinking?

Not all her skills, including her 2011 book, A Guide to Australian Etiquette, could prepare Ita for that. In no time the duckies, the luvvies, the assorted puppeteers of the left together with the general social misfits that inhabit that space had her house-trained. Soon she was really talking the talk – and to prove she could finally walk the walk in February this year she conned Morrison to the tune of $3.3bn over the next three years.

But hold the horses -  only last weekend came the news that:  ABC chair Ita Buttrose has been accused of failing to comply with the broadcaster’s own editorial style guide in a major speech where she referred to First Nations people as “Aborigines”.[1]

My God. Shock, awe and horror! NCA NewsWire journo Ryan Young reported that:  Former ABC, SBS and NITV journalist Jennetta Quinn-Bates took offence at use of the term “Aborigines” and took to Twitter to highlight it was not in line with the ABC style guide.

Evidently the hapless Ita used the term in Sydney on Friday night as she delivered an annual media lecture in honour of the distinguished journalist Andrew Olle, who died in 1995 at age 48.

Responding to comments her Twitter post had attracted, Ms Quinn-Bates said “speaking this way sets a terrible example…..Leaders are meant to be admirable, not ignorant and borderline racist…This is unacceptable.”

Ms Quinn-Bates took it upon herself to express: “Sincerest apologies to my former ABC indigenous colleagues.”

Well – What to say about all this anger, insensitivity and self-righteousness?

I’ll start off by saying I’m totally discombobulated. I’ve always understood the word aborigine to be of Latin extraction, being: ab origine – ‘from the beginning’.

To this end I thought an aborigine was a person, or descendant thereof, that has been in a country or region from the earliest of times:  thus, in the Australian context, to describe the earliest inhabitants of our continent, aborigine [noun] and its adjective, aboriginal, were therefore correct, proper and ‘good’ words.

Moreover, for years I’ve lived by the definition given by Australia’s own Macquarie [National] Dictionary: aborigine noun 1. one of a race of tribal peoples, the earliest inhabitants of Australia. 2. a descendent of these people, sometimes of mixed blood.  3. [pl] (generally) the primitive  inhabitants of a country;  the people living in a country at the earliest period.[2]

Thus a definition that has served everyone well – including Blackfellas and Whitefellas – yes, those terms are still the accepted currency of mutual classification in many parts of non-latte chatterati Australia.

On the 27th of May 1967 Australians were asked to vote in a referendum to approve or disapprove:

"An Act to alter the Constitution so as to omit certain words relating to the People of the Aboriginal Race in any State and so that Aboriginals are to be counted in reckoning the Population"?

Personally I have trouble with the wording of the question inasmuch it fails to distinguish between noun and adjective in the word ‘Aboriginal’ – but then, who am I to question the wisdom of our constitutional lawyers who framed the question.

But I am more than happy to discuss the question of what to call our aborigines.

Let’s start with the nonsense raised by Ms Quinn-Bates. I thank her for letting me know that the ABC style guide wants us to refer to them as First Nations Peoples.

One can theorise, rant, rage, write revisionist history or use as much sophistry as one likes, but one can never describe the motley collection of hunter gatherer tribes that sparsely populated Australia as ‘Nations’. One can change the definition of nations until it becomes meaningless – say, any group of two or more subsisting in the wilderness – they are not a nation.

So what to call them? Let’s look at the history of their collective description. ‘Natives’ seemed to be the original formal choice of colonial times.  Agencies of colonial governments were set up to protect natives, to provide native welfare, the police had native trackers and native mounted police and so on. That term fell out of popular parlance in favour of aborigines. Thereafter existed a raft of government agencies providing aboriginal welfare, aboriginal housing, aboriginal health, aboriginal education and so forth.

Indeed, in 1990 the Hawke government established The Aboriginal and Torres Strait Islander Commission [ATSIC], the Federal Government body through which Aboriginal Australians and Torres Strait Islanders were to be formally involved in the processes of government affecting their lives. A great deal of money was expended on a great number of aboriginal programmes under the aegis of ATSIC. Moreover, evidently the Commission provided, on the side, a great deal of money to select and favoured people before it was dissolved in 2005 after extensive investigations into corruption and embezzlement.

At this point further collective names were coming to the fore in the lucrative field of aboriginal politics.

The term ‘indigenous’ began to see favour, meaning a peoples originating or occurring naturally in a particular place, native to or associated with a place by birth: being an indigenous inhabitant of Australia. Thereafter the idea of ‘custodians’ of the land received some traction as did ‘traditional owners’, and now we have ‘first nations’.

The term ‘first nations’ was coined in the hotbed of woke guilt, Canada. As evidenced by everything woke in Australia, practising wokists are far too bland to imagine original terms for their perceived social injustices – so looking further afield for inspiration as to how best to describe our aborigines let us cast our eyes to the crackpot demi-nation south of Canada, the so called United States. That benighted nation contains Black Americans, White Americans, Afro Americans, Hispanic Americans,  Asian Americans, Latino Americans, Native Americans - in fact as many Americans as there are other nations in the world.

Let me set aside this satirical tone in favour of some serious comment. The tribes that inhabited this continent before colonisation were not the Rousseauan idyll of peoples living in paradise corrupted by the advent of Western civilisation, as so many contemporary commentators would have us believe. The Australian continent is generally extremely harsh. The tribes were disparate hunter gatherers, a minority of whom practised cannibalism; some of whom for extremely practical and sound reasons, practised infanticide. In short life was, for most, ‘nasty brutish and short’ to coin a phrase.

This history has been totally expurgated to the point that today’s schoolchildren are being taught meaningless rubbish about our early Australians.

There can be no doubt that the aborigines of Australia were often treated harshly, many were killed, deliberately. This is regrettable, it is tragic. It is also history. They were the values and attitudes of the times – white people were also treated harshly – brutally – that is also regrettable. They were hard harsh times. We should read and appreciate our history accurately, sometimes with sadness, perhaps sometimes with shame, and sometimes with pride. It is one thing to bring historical events to our notice, but it is totally another thing assume the moral arrogance in judging values retrospectively and then visiting the perceived sins of the fathers upon their sons. None of us have that right. To do so is not only a travesty of justice but a sheer moral nonsense. It serves only to perpetuate discord, injustice, discrimination and the enrichment of a select and undeserving few.

I have no doubt Ita will cave in to her Tea Room Soviet back at the ABC. Having now reached the age four-score, I’m sure she has far better things to do with her remaining years than trying to deal with that confounding farrago.

So, in conclusion, what are we going to call that marginal [3%][3] cohort of our broad Australian community who claim their lineage back to the original tribesmen of this continent – let’s simply call them Australians.