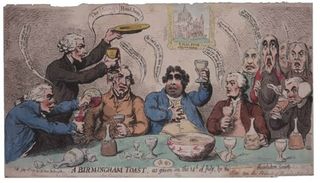 On one of the last evenings of last year I attended a dinner party at which an urbane and erudite Dutchman discoursed energetically about the lack of accountability in politics. In his view, a senior officer of a private enterprise company who makes a serious mistake is subject not only to dismissal but, quite possibly, also criminal proceedings.  Politicians, he continued, unqualified as they usually are for the ministerial responsibilities with which they are entrusted are not held accountable for their mistakes – indeed, rarely are they turfed out of Parliament and when they retire or lose their seats they retain their pensions and perquisites intact.

Given my opinions on the matter the dinner conversation turned into a merry critique of politicians and their works. Our hostess, a charming lady of acuity and a sometime acerbic turn of phrase, ensured the embers of our disapprobation were well fanned for the duration of the evening.

The upshot being that I entered the New Year in fine temper. To be more specific, four pieces of public policy cock-ups stuck in my political craw – namely: the bushfires in Victoria; the security of Australian diplomats in the Middle East; the construction of Australia’s new fleet of submarines and, last but certainly not least, the plight of large numbers of British soldiers likely to be prosecuted for War Crimes consequent to their service in the Iraq War.

With reference to the Victorian bushfires the question must be asked, why, in light of the 2009 Black Saturday tragedy, has the new Victorian Government scrapped the 5% target of controlled burns on public land that had been introduced in the light of evidence and expert testament consequent to the 2009 bushfires? A recent scientist described this reversal as poor policy and ‘pathological science’.[1]

The answer, as we all know, has nothing to do with sound science but all to do with politics. Why therefore should politicians who wilfully choose to ignore or override advice provided to them from credible agencies not be held accountable for their actions? A few prosecutions for negligence or failure of duty of care would certainly sharpen more than a few pencils.

Likewise, why in the good name of Mars[2] have we delegated the security of our diplomats in Iraq and Afghanistan to a motley crew of grab-bag mercenaries? Surely this is quite rightly the province of our own security and armed services?  What clown determined to imperil the safety of Australians serving their country in dangerous places for the sake of a handful of silver? He or she ought to be hauled over the coals and stripped of their post. Will this happen? Of course not.

The question of Australia’s new submarine fleet is so mired in politics – as was the previous fleet – it has become a national humbug. Pork barrelling, corruption – in Australia! Of course not. Just politics as usual. There has been no real accountability to the public; no real puboic debate as to who or where can the best ‘subs’ best suited to Australia’s requirements be built – it’s all about elections and jobs. Apart from the obvious question, why after a century, haven’t we the expertise and capacity to build our own ruddy submarines – the matter raises a number of real questions as to political accountability? Who, for example, can remember the name of the ministers who signed off on the debacle that was the Collins Class Submarines?

To change focus but not intensity – I confronted the second day of the year with the disgraceful news from the BBC that large numbers of British soldiers may face prosecution for war crimes consequent to their service in the Iraq War.[3] That the the Iraq Historic Allegations Team was created in the first place, let alone allowed traction, is a damning indictment of the British political class. That a bunch of grubby ambulance chasing lawyers, activists and assorted scum-bag sharpies has been let loose on the British military involved in an unnecessary war deliberately enjoined by a flatulent political pygmy is nothing short of treasonous. Where is the accountability?  Blair and the whole gamut of parliamentary thugs since him should be accountable – not the soldiers. One can only pray that sheer decency – remember we’re talking about politicians – will come into play and the great British public will speak out with decision and stay the hand of injustice.

Thus, less than a week into 2016, the taste of Italian chicken and polenta still sweet in my memory, my bile rises at the betrayal of our political elites. I have no doubt my Dutch fellow dinner guest and I will shortly resume our discussion – I have no doubt our list of gripes will be longer – and I have no doubt that the seeds of disaffection amongst the community will have grown commensurately so.

In our lifetime there existed a level of decency throughout the community. It's now lost to a self serving, hypocritical, narcissistc manner, bold as brass and the new norm. Dear oh Dear!

I too remember decency - an intersting concept if I remember correctly - we used to hold the door open for ladies, walk on the road side of the pavement and be prepared to die for our country.

USA Do not have Ministers but theoretically experts carrying out ministerial role. Politicians are law makers. Are you infering the American system may be the way to go

Dear Bill - No...No!!! Not the dreaded American system - bring back the Rotten Boroughs!

So we have a collection of unqualified and self serving careerists being monitored by an equally unqualified but ideologically driven media, none of whom are actually accountable to the public?

"We are the unqualified, doing the unconscienable, leading the unaccountable driving the uncomprehending unwashed along the path to uncontrollable and unnecessary ruin!"

Hear, hear Mordechai! The biggest problem is a compliant media that meekly believes politicians' lies and general public apathy regarding anything political. It's a crying shame.

Too Right! Might I also add - a sometime ideologically driven media! And talking about crying - what about 'Obama tears'? Now that was something else again.

I agree with your analysis, even with the comments in the email from Oliver Cromwell. Unfortunately I can't hold him up as the paragon of virtue of the alternative!!

True! But I do have a soft spot for him!