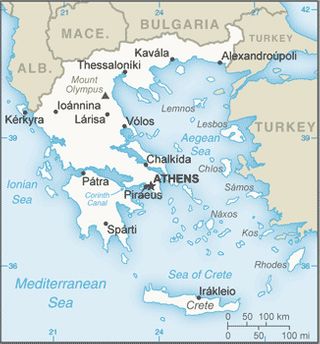 Timeo Danaos et dona ferentes: [Latin]. From the Aeneid (II, 49), written by the Roman poet Virgil between 29 and 19 BC. Paraphrased in English as the proverb Beware of Greeks bearing gifts. Literally: "Fear the Danaans [mainland Greeks], even those bearing gifts".[1]

That basket case of Europe, the Third Hellenic Republic, is to go to the polls yet again following the resignation of Prime Minister Alexis Tsipras on Thursday last [20 Aug 2015].

The mercurial Tsipras, who was elected in January, said he had a ‘moral’ duty to go to the polls now a third bailout had been secured with European creditors.[2]

Rewind to Monday 29 June 2015 and hark Prime Minister Alexis Tsipras urging voters to vote ‘No’ in an ill-conceived, unnecessary and expensive referendum on European austerity measures. Hark at him declaim:

“We should respond to authoritarianism and harsh austerity with democracy, calmly and decisively … Greece, the birthplace of democracy, should send a resounding democratic message to the European and global community.”[3]

Let us examine this exhortation from an historian’s perspective.

On face value it was an evocative call to arms recalling his country’s former glories. In reality it was completely empty rhetoric. Such a call to the past conveniently overlooks the fact that Greece has been in demographic flux since the demise of its city states two thousand plus years ago.

The Homeric heroes of the Trojan wars, the sparkling minds of the Lyceum Peripatetics and the Epicurean Gardens are far, far distant ancestors to the modern Greeks of today.

Successive hordes of Romans, Arabs, Turks and other peoples of the Near East have settled and occupied the sprawling archipelago that constitutes Greece. Moreover, Tsipras conveniently ignores the fact that from 1453 until 1830 Greece was part of the Ottoman Empire.

Having said thus, Greece has some claim to a continuous cultural heritage. It can boast of a history stretching back almost 4,000 years.

In c.146 BC Greece succumbed to the rampant Roman Empire. In 330 AD Emperor Constantine moved the capital of this empire to Augusta Antonina thereby establishing the Eastern Roman Empire. In doing so he built a new city to reflect the brilliance of his new Empire and his conversion to Christianity. The new city, named appropriately, Constantinople was a masterpiece of city and strategic planning. Overlooking the Bosporus Strait, Constantinople was considered impregnable and, as befitting its role as the New Rome, it exceeded previous Roman cities in size and magnificence.

Western scholars of the C19th came to term this eastern empire as the Byzantine Empire or, quite simply, Byzantium. The origins of the name, Byzantium, are shrouded in legend. It is broadly accepted that the name is derived from Byzas, a legendary leader of the Greeks from the city of Megara. Byzas captured the peninsula from pastoral Thracian tribes and built the city circa 657 bc.[4] In 196 AD, having first razed the town for opposing him in a civil war, the Roman emperor Septimius Severus rebuilt it, naming it Augusta Antonina in honour of his son.

The Byzantine Empire fell to the Turks in 1453 and the Greeks remained under the Ottoman yoke for some 400 years. On March 25, 1821, the Greeks revolted against the Turks, and in 1830 the Kingdom of Greece was declared. As the new state comprised only a tiny fraction of the country, the struggle for the liberation of all the lands inhabited by Greeks continued.

As an interesting aside, The Greek impetus for independence attracted the romantic and liberal zeal of the flamboyant roué and English poet, Lord George Byron. In July 1823 he left Italy to fight for the cause. He spent £4,000 of his own money to refit the Greek fleet. The following year he was training Greek troops in the town of Missolonghi in preparation for an assault on the Turkish-held fortress of Lepanto when he caught fever. He died on 19 April 1824, just after his thirty-sixth birthday, under the noses of the Turkish frigates. He is still regarded as a national hero in Greece today.

British and French meddling in the partitioning of the Ottoman Empire after the First World War led to the British occupation of Constantinople. Encouraged by Britain Greece invaded Turkey in an endeavour to regain what it considered to be Greek territory, thereby instigating the Greco-Turkish War of 1919–1922. This war ended in defeat for Greece and consolidated the power of the Turkish nationalists under General Kemal Ataturk.

Thereafter the modern history of Greece is characterised by political upheaval and instability. The ‘on-and-off’ again monarchy was interspersed with various republican governments and, between 1936-41 a dictatorship by General Metaxas who introduced a Third Civilisation – a semi-fascist regime which brooked no opposition, thereby forcing the growing Communist Party underground. Greece was occupied by the Germans during the Second World War. It was saved initially from outright civil war in 1944 by the landing of British troops. But tensions and fighting resumed in a protracted civil war between supporters of the king and various other anti-communist and communist rebels. Following the communist defeat in 1949 the country joined NATO and became a member of the European council.

Echoing contemporary times, in July 1951 Field Marshall Papagos launched a right-wing party, Greek Rally: “to rescue Greece from political bankruptcy and give her the strong government she needs”.[5]

Not until May 1952 were women over twenty-one given the vote. Subsequent to further political volatility an army coup on 21 April 1967 installed a military junta known as ’the Colonels’.

The last king, Constantine II, was forced into exile and a republic was proclaimed in 1973 by the junta. In 1974, in no small part due to the Greco-Turkish crisis over Cyprus, the junta was overthrown and democracy restored. A referendum in December 1974, confirmed the abolition of the monarchy and the establishment of the current parliamentary republic and presidential head of state.

Greece joined the European Union in 1981 and adopted the euro in 2002. The current crisis as to its financial debt has been simmering since 2010.

So, in view of the foregoing, what can we say about Greece?

Not much. In short, it may be viewed as a great political and cultural disappointment.

The Byzantine Empire existed for nearly 1,125 years, and was one of the greatest empires of all time. It was an empire that could have carried the linguistic and cultural heritage of Ancient Greece into a new Christian civilisation.

Constantinople was the cultural and political hub that preserved Greek and Roman traditions whilst much of Western Europe degenerated into the Dark Ages. The Byzantine Empire protected Western Europe’s legacy until barbarism was overtaken by rise of the nation states of Europe. The Byzantine Empire preserved Greek and Roman masterworks, cultural and architectural styles and served as the precursor to the Renaissance.

Indeed, broad agreement amongst scholars would have it that without Byzantium to protect it, Europe would have been overrun by Islam rampant.

The Greeks, during their time of subjection to their Ottoman masters, preserved their language, their religion and their strong sense of identity. To romantics like Lord Byron, the flowering of a new age of Grecian splendour seemed imminent. Indeed, the heroic expression of Greek nationalism flickered and burnt bright for a short and glorious period of some one hundred years before it was self-extinguished in aggrandisement, self-interest, petty politics and naiveté. It soon became apparent to the Twentieth Century that whatever sense of decent governance Greece might once have had, had long been tossed out with the slops into the not so blue Aegean.

In modern history Greece has hardly distinguished itself in cultural or technological innovation. As a political entity its contribution to the geopolitical milieu is negligible. It is almost alone in Europe lacking any sort of industrial or technical base. It is an old fashioned and unviable agrarian society in the age of information technology.

Invisible receipts, originating mainly from tourism, shipping (Greek registered and Greek owned ships used to constitute the largest merchant fleet in the world), and migrant workers' remittances offset to some extent the balance of trade deficit. Its dependence upon tourism monies illustrates its economic weakness. The economic significance of monies remitted home by the Greek diaspora amply illustrates that its most successful export has been people.

The fact that it nearly became a communist state is perhaps an indication of its people’s predilection for reliance upon the state. Greeks have been used to the good life – minimum effort and maximum reward – hardly the reflection of its heavily mythologised past.

Returning then to Alexis Tsipras – his invoking the glories of democracy was very much oratorical bravado - it should be remembered that Greek democracy per se was contained to the city state of Athens - Sparta was certainly no democracy – and Athenian democracy was limited at best.

As the inheritors of this tradition modern Greeks have aped their ancestors only inasmuch they devote too much of their energies in indulgence and fighting each other.

It is now some two thousand years since Virgil offered his opinion on the value of Greeks and their gifts. It might be fitting to add to his injunction: “Et adducam vos in ruinam. They will lead you to ruin.”

Whoever said that the classics have nothing to teach us today?

The Oxford History of the Classical World. OUP. 1995

[1]The Aeneid is a Latin epic poem, written by Virgil between 29 and 19 BC, that tells the legendary story of Aeneas, a Trojan who travelled to Italy, where he became the ancestor of the Romans.

Excellent article John. I guess the lesson is to stop fanaticising about the past and face the realities of the present

Great background, great summing up of the current situation and oh hold your breath for the future because God only knows they want the easy way out, but it's not available. Great article John.

ODE to the (odious) Grecian Urn!!Dug themselves deeper into the abyss + Well done John++

John you have excelled again. But what should they do. I guess no one really knows. Austerity? No will or inclination?

Brilliant read, John! You've summed up 4000 years pretty darned well, and your description of Greece's contribution to modern democracy, economics and its history of eclectic governments is spot on.