The Bridge of Spies - A Personal Memoir 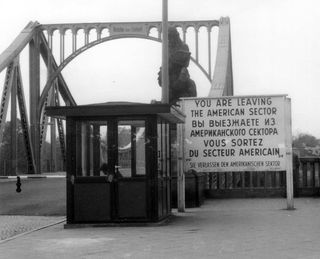 "The Bridge of Spies"Photo by the Author. Taken in November 1983 with a 1959 Ziess Ikon Contaflex.

I had the good fortune yesterday to see the very recent Steven Spielberg film The Bridge of Spies.

It is, in my view, a brilliant film and one of the best made about the Cold War. The settings were evocatively accurate and the acting superb – Tom Hanks is masterful as the unlikely Cold War anti-hero – and the historical and ideological detail are sensitively managed.

For me the film brought back vivid memories of Germany, of childhood and boarding school days in Britain. I well remember as a schoolboy the engrossing drama of the 1960 U2 spy plane incident and, two years later, the heated Common Room debates about the Gary Powers/KGB Colonel Vilyam Fisher [Rudolf Abel] exchange on the bridge in Berlin on 10 February 1962. Moreover, the building of the Berlin Wall in ’61 fired many of us boys with a passionate detestation of Communism.

But to me such memories were my life. It is not inaccurate to say that I was one of the children of the Cold War. I was born in Germany, my first memories and first language were German – my father, a British engineer army officer, was working with the Germans rebuilding Germany from the devastation of WWII. My earliest memories were of a military nature. Indeed, only months after my birth came the Soviet Union’s 'Blockade of Berlin' and the amazing ‘Berlin Airlift', the first international crisis of the Cold War. After the death of my mother, I accompanied my father on his posting to Singapore and Malaya, then in the throes of a bloody Communist insurgency.

At senior school age, in the tradition of all ‘army brats’ I was sent to boarding school back ‘home’. My school, Lindisfarne College in North Wales, had more than its share of army brats, Indians, Pakistanis, Chinese and British ‘overseas boys’ whose parents were supervising Britain’s retreat from Empire. Thus this plural assemblage of male youth interacted with each other and provided an interesting cross-fertilisation of opinion during this critical period of world history.

In my House, Wolverton, was a German lad from Berlin. He was the son of a wealthy German media mogul who sent his son to school in Britain to learn English. He arrived in about ’63 and regaled us with tales of the East West divide and the building of the Berlin Wall. Willy and I formed a close attachment, helping shape my politics and feeding my German inclinations.

And then, leaving school, I met my youthful Götterdämmerung fighting Communism with the Australian army in Viet Nam - after which came a lifetime in academia trying to make sense of it all.

But to return to Germany and its Bridge of Spies.

I was back in Germany in 1983 to find my mother’s grave in Hanover. I then caught a train to Berlin where I spent several impressionable days. It was very late autumn and my first impression, aside from minefields, barbed wire and sentry towers along the railway line, was the total absence of the sun for the duration of my visit!

My strongest memories revolved around Check Point Charlie and a bleak day spent in GDR Berlin – the East German Workers idyll! I remember a long and expensive night in the company of a French Air Force flight crew at a sleazy clip-joint somewhere very downtown West Berlin.

And I remember a cold misty day at Wannsee and the Glienicke Bridge – the Bridge of Spies.

Wannsee is a stunning recreation park located in southwestern Berlin. It comprises two lakes on the River Havel crossed by the neo-classical iron Glienicke Bridge leading into the old Brandenburg capital of Potsdam. The area is steeped in Brandenburg history featuring the Schloss Glienicke [Palace]), hunting lodges and other examples of neo-classical architecture.

Sadly, Wannsee was also the site of the infamous January 1942 Conference that formulated the Final Solution to the Jewish Question.

In 1983 the lakes and river delineated East and West Berlin and the bridge was closed to all but military and authorised traffic.

Being late autumn the trees were almost bare and the ground covered with leaf litter – why is that German leaf litter always seems so much thicker and more luxurious than other leaf litter? Why am I always reminded of Nietzsche’s observation about the Germans dragging their soul through the forests?

As I walked slowly through the park the Brandenburg architecture, gateways, lodges and grey-stone buildings melded in and out of the mist. There was a large kiosk restaurant, but given the season, the bleakness of the day and the fact that it was a week day, there were few patrons.  I took a ferry ride on the river and, as we motored along the lakes, I had a magnificent view of the bridge. The air was chill; the West German flag flew stiffly from the stern, stark against the grey clouds.

I always travelled alone but on that day I felt more alone than ever. It was a sad, grey day – a day when memories and imagination envelop.

Thanks for sharing this with us John. I too enjoyed the Spielberg movie recently.

Loved reading this. You should write more about your travels.

Previous comments were from me.

I enjoyed your article John which rekindled some similar memories of mine. Do hope we will see you at the next gathering of old lindisfarnians in 2017.

Well written, what ever happened to 'Willy G". I share many of your school memories - Cheers from another "Army Brat"

Spoken from the heart Gripping narrative I felt transported there by your very words .Danke !!!