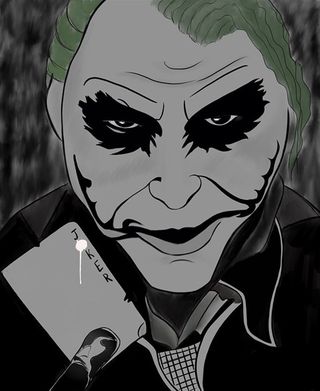 Coincidently, this being Mental Health Week, I went the cinema to see the very recently released and much-hyped flick – Joker.

It is a powerful and doubtless for some, unpalatable reflection of our times.  The brilliant imagery of a totally alienating Gotham City is, in itself, conducive to mental illness. The juxtaposition of images contrasting the horrible ‘magnificence’ of slums and the estranged sterility of the city awakened for me insentient instincts. The photography has been well considered, chosen and executed – powerfully evoking prosperity and poverty; tragedy and comedy; happiness and misery, and privilege and dispossession.

Under the direction of Todd Phillips the violence is controlled - and thus controlled is ever more dreadful. Nothing gratuitous is offered: the dialogue alternates between insanity and cruel humour; the denouement is Gothic and the finale, pure bathos – with perhaps, a hint of evil.

In its cinematography I considered Joker to be equally as memorable as A Clockwork Orange. Although it is a distinctly different film, some forty-seven years on it shares a significant contemporaneity - it is a stinging fable - a fable of liberal failure. It highlights the failure of the liberal order to provide practical address of societal dysfunction; it reflects an absence of any sense of transcendent spiritual endeavour in modern liberalism and it graphically illustrates how the failure of liberal leadership begets mob rule.

Joaquin Phoenix as the Joker is simply brilliant. His performance is truly a tour de force and worthy of an Oscar. Retaining his unique screen presence Robert De Niro brings to the film a touch of sanity, albeit a sanity of cynical proportions.

This is an excellent, thought provoking and visually engrossing film.